Chat with us, powered by LiveChat

How does wifi works?

Typically, a home Wi-Fi network scheme contains an access point and at least one device.

The wireless adapter generates information into a radio signal and transmits it over the air via an antenna. The wireless router receives and converts the signal back. Further, the information is sent by the router to the Internet via a cable from the provider.

The reception of information is carried out in a similar way. After receiving information from the Internet, the router converts it into a radio signal and sends it through the antenna to the wireless adapter of the device.

The provider itself cannot influence the operation of the wireless home network.

Knowing the SSID and password of the network, the client can connect to this access point (the data is set by the user when configuring the router). When two access points with identical SSIDs come into the coverage area or a previously connected one, the device can automatically connect to better coverage.

Allows you to deploy a network without laying a cable, and can reduce the cost of deploying and expanding the network. Places where it is impossible to lay the cable.

Device mobility, which eliminates cable problems, such as a laptop that is used in multiple rooms.

Wi-Fi has a global standard and can work all over the world without additional settings or device upgrades, but within a conditional coverage area.

Within the Wi-Fi zone, several users can access the Internet from computers, laptops, phones, etc.

The 2.4 GHz frequency band and overlapping signals from access points operating on the same or adjacent channels can interfere with each other. This problem can arise with a high density of hotspots, for example, in large apartment buildings, where many residents set up their own Wi-Fi hotspots.

Most devices operate at a frequency of 2.4 GHz, this implies - the use of the 2400 MHz-2483.5 MHz band with a step frequency of 5 MHz, which allows you to organize 14 channels (13 available) - which may not be enough for a large number of users in this range, taking into account all devices in the coverage area.

It is possible to simultaneously use wireless communication with several devices and use one router. However, if a router fails or when a large number of network users try to use broadband at the same time, mutual interference or even unexpected disconnection may occur.

Wi-Fi has a limited range, about 50 m of an open area or a zone of prime visibility, it also depends on the frequency. Any object can reflect and attenuate the signal level, depending on the presence of physical obstacles between the devices, the presence of interference from other electronic devices. A concrete floor, a mirror and even a microwave oven located between the devices and the Wi-Fi router degrade the quality of the connection and, accordingly, the transmission speed.

High energy consumption compared to other standards, which reduces autonomy and increases the temperature of the device.

Incomplete interoperability between devices from different manufacturers or incomplete standard compliance can result in limited connectivity or slower speeds.

Overload of equipment when transmitting small data packets due to the attachment of a large amount of service information.

Low suitability for applications using media streams in real time, the quality of a multimedia stream is unpredictable due to possible high data transmission losses caused by a number of factors beyond the user's control.

Wi-Fi networks use several modifications of the 802.11 standard:

For diagnostics, you need a wireless device and a scanner program, for example, Free InSSIDer for Windows PCs or WiFI Analyzer for Android devices.

By running this program, you can see all the networks within the range of the wireless network.

The main parameters are required: network congestion/channels, data transfer rate, signal strength, WPA / WPA2 / WEP encryption algorithm used In the example in the picture, you can see that the selected source overlaps other networks, and most likely this source will work well, but if your the source represented in green on the graph will perform relatively poorly. 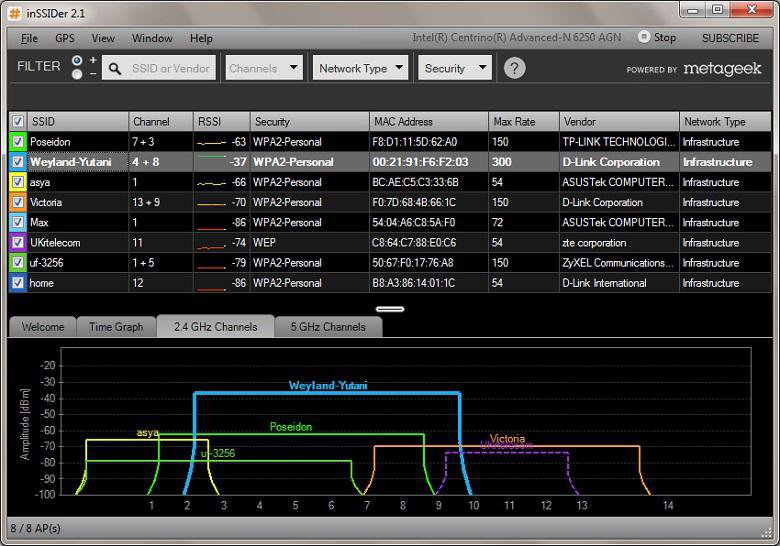 In most cases, rebooting the router can improve the situation, but not solve it. When the router is rebooted, a channel is randomly selected, which may be cleaner.

Key decisions will be:

Changing the channel to a freer one (forced, see Wi-Fi diagnostics)

Coordination with the owners of these sources, who works on which channel

Transition of problem devices to the second band (5 GHz). (Both the router and the device must support the 5GHz standard). Most likely, you will need to replace the router with a dual-band one.

Assistant from «‎BRIZ» in Telegram

Join us on Telegram